The Town of Miami Lakes is located in Northwest Miami-Dade County on both sides of the "big bend" along the Palmetto Expressway. Conveniently located just 16 miles North of Downtown Miami, 10 miles from Miami International Airport, 20 miles from Fort Lauderdale-Hollywood International Airport, and adjacent to Opa-Locka Airport; the official boundaries are NW 170th Street and the Palmetto Expressway (SR 826) to the North; NW 138th Street to the South; NW 57th Avenue (Red Road) to the East; and Interstate 75 to the West. 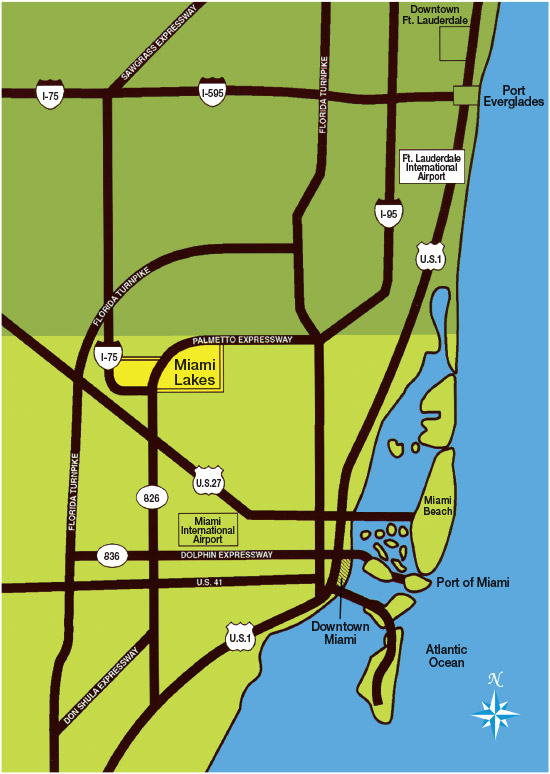 A strong logistics infrastructure complements the enviable geographic position and forms a conduit for a continuous stream of visitors and commerce into the area. Among the most significant competitive strengths includes easy access to Miami International Airport, one of the nation’s busiest cargo and passenger airports; the Port of Miami, the world’s leading cruise port; and a new slate of transportation projects that will advance the economic development potential of the region. With expeditious access to several major interstates, sea and air ports, doing business in Miami Lakes is convenient and made-easy.

Through our unparalleled international infrastructure with world-class facilities like Miami International Airport and the Dante B. Fascell Port of Miami-Dade, our community is a global center for international trade. For many years, companies from throughout Latin America and the Caribbean have used the Miami Customs District to transport goods to markets in the United States, European companies have utilized out infrastructure to ship goods to both the U.S. and Latin American markets. Increasingly, companies from many Asian countries are following the example of their European counterparts and shipping goods through Miami-Dade’s ports to important markets in Latin America and the Caribbean.

The Dante B. Fascell Port of Miami-Dade (Port of Miami) is the world’s leading port for cruise line passenger traffic, while also showing impressive strength in international freight. The Port of Miami’s status as a leader in international freight is evident from the rapid growth of trade with China, which send more ocean freight to the port than any other country. Additionally, approximately 35 shipping lines sail from Miami to more than 250 other seaports in more than 100 countries. Known as the Cruise Capital of the World, the Port of Miami welcomed more than 3.7 million passengers to our community – a three and a half percent increase from the previous year.

Miami International Airport (MIA) is one of the most important economic engines and a world-class facility that connects the Town of Miami Lakes to the world. Airlines serving MIA fly nonstop to 47 destinations in the United States and Canada, 32 in the Caribbean and The Bahamas, 24 in South America, 13 in Central America and 14 throughout Europe and the Middle East. As an air cargo center, MIA ranked 10th worldwide and 1st in the United States in 2010.

Opa-locka Executive Airport (OPF) is located directly adjacent to the Miami Lakes 57th Avenue boundary. Designated as a reliever to Miami International Airport, Opa-locka Executive Airport features no landing fees and quick and easy access. The airport offers full FBO service, a wide range of aircraft repair and maintenance services, including airframe, power plant and avionics repair, and US Custom Service on the airfield. The airport is also home to the busiest U.S. Coast Guard Air/Sea Rescue Station in the nation.